The next stable Firefox version, Firefox 67, will display a profile icon in the main toolbar to make Firefox Account features more accessible and discoverable in the web browser.

Firefox can be used without an account and that won’t change; Firefox Accounts are needed to enable sync functionality in the browser and that is without doubt the main functionality right now. Mozilla started to use Firefox Accounts for other web services such as Firefox Monitor, Firefox Send, or Lockbox recently, and there is an option to use a “send tabs” feature to send open tabs to another device.

Mozilla ran a Shield Study recently to find out how it could improve the discoverability of the Firefox Account feature. The Shield study ran for 28 days; Firefox displayed an account icon in the main toolbar during the study and this resulted in an 8% increase in sign-ins to Firefox Accounts.

Users who participated in the study were asked to fill out a survey. 45% of users liked the profile icon (avatar), another 45% were indifferent to it, and 10% disliked it.

Mozilla decided to go ahead and implement a profile icon natively in Firefox to improve Firefox Account discoverability and use. 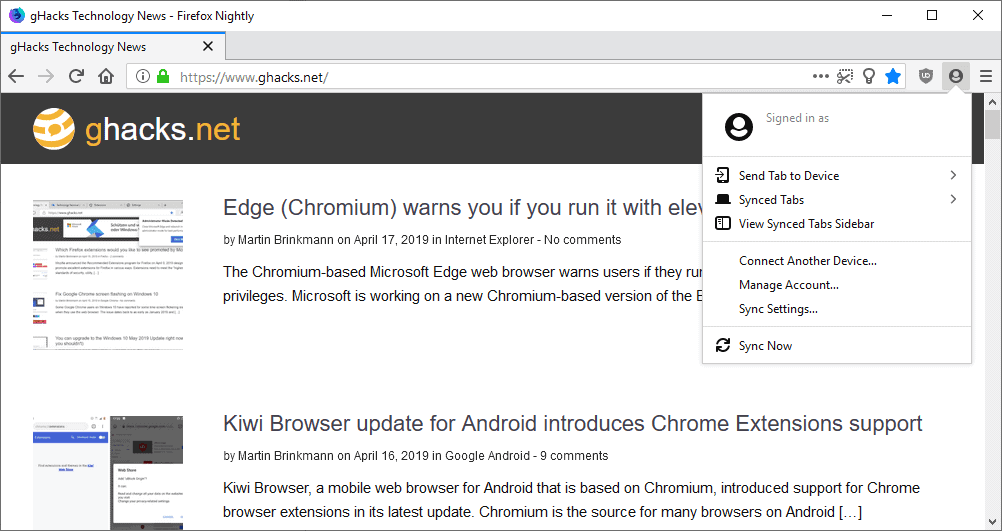 The profile icon is already visible in Firefox and Nightly versions at the time of writing. It will launch with Firefox 67 in the coming month in the Stable channel. Firefox 67 is scheduled for a May 14, 2019 release.

The icon is displayed by default, even to users who are not signed in to a Firefox Account at the time. A click on the icon displays several options that depend on your sign-in status.

If you are signed in, you get the following options:

The options are self-explanatory for the most part. Selecting “connect another device” displays an option to send “Firefox” to a mobile device to add it to the main Firefox Account.

Managing the Profile Icon in Firefox

The profile icon is delivered in a non-fixed status. Means: Firefox users may move it or remove it from the browser’s toolbar just like many of the other icons; this is a fundamental difference to Chrome’s profile icon which users cannot remove or move.

Signing in to a Firefox Account is useful if you use multiple versions of Firefox on the same device or multiple devices, and want to sync data between them. It can also be useful as a backup of data that is stored in encrypted form in the cloud.

Mozilla does the right thing by allowing users to remove it or move it; those who don’t use Firefox Account functionality can remove it once and be done with it.

Ghacks needs you. You can find out how to support us here or support the site directly by becoming a Patreon. Thank you for being a Ghacks reader. The post Firefox 67 will display a profile icon in the main toolbar by default appeared first on gHacks Technology News.