Mozilla plans to introduce support for a picture in picture mode (PiP) in the organization’s Firefox web browser in Firefox 68.

Picture in Picture mode takes video content on a side and displays it in its own window that acts independently from the browser’s main window for the most part.

Designed specifically for users who want to watch videos while doing other things in the browser, it is a popular mechanism that is available in several Chromium-based browsers such as Google Chrome, Vivaldi, or Opera (called Video Pop Out) already.

Mozilla revealed that it is working on a Picture in Picture mode for Firefox in February 2019; the organization ran a Test Pilot experiment called Min Vid in 2016 which tested a similar but unrelated implementation. 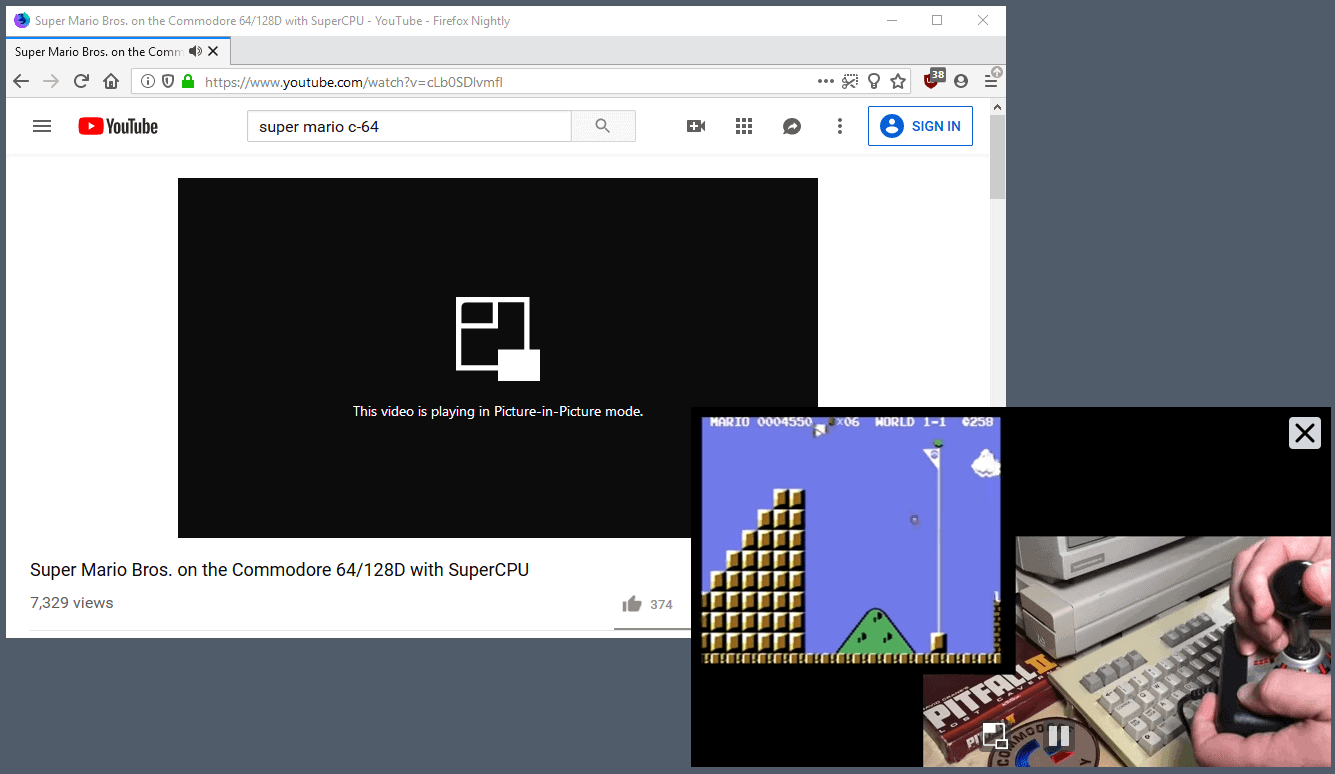 Mozilla’s implementation in Firefox is straightforward. Users need to hover with the mouse over the playing video on supported sites — most HTML5 video sites should work — to display the Picture in Picture icon.

A click on the icon opens the Picture in Picture interface and Firefox continues playback of the video in the new window.

The video content area in the main window displays “This video is playing in Picture-in-Picture mode”. Firefox users may resize the Picture in Picture window, drag it around to position it on the screen, or use the play/pause or fullscreen buttons displayed in the window.

There is also a close button to terminate the Picture in Picture window; doing so restores the video in the main window automatically. The whole process is fluent and well designed.

Other controls are missing from the Picture in Picture window; options to change the volume, video quality, skip to the next video, or change other parameters are not provided.

Captions, at least on YouTube, are displayed in the main window and not Picture in Picture window currently; the feature is still being worked on, and Mozilla has some time before it lands in Firefox 68 Stable.

Firefox users may control the functionality using the preference media.videocontrols.picture-in-picture.enabled. Just load about:config and set it to True (Enabled) or False (Disabled). If you don’t use Picture in Picture mode, you may want to set it to disabled to avoid accidental activation. Firefox 68 is scheduled for a July 9th, 2019 release.

Picture in Picture mode is a popular feature; introduction in Firefox brings feature parity with Chrome and many other Chromium browsers. The new mode is enabled in Firefox Nightly, currently at version 68, already.

I don’t use the mode at all, mainly because I have enough space on the desktop to display two browser windows side by side.

Now You: Do you use (will use) picture in picture modes in your browser of choice?

Ghacks needs you. You can find out how to support us here or support the site directly by becoming a Patreon. Thank you for being a Ghacks reader. The post Firefox 68: Picture in Picture mode for Video appeared first on gHacks Technology News.