Lego Tower is a new free to play game for Android and iOS devices by NimbleBit LLC, a game development company that is best known for its Tiny Tower game.

It should not come as a surprise therefore that Lego Tower resembles Tiny Tower. The game is not a 1:1 copy of Tiny Tower with a Lego theme plastered on it though.

First the basics: Android users can download the game from Google Play, Apple iOS users from the App Store. The Android version that I looked at is available for all versions of Android starting with Android 4.3.

The game is free to play but it includes in-game purchases to speed up certain operations or make certain purchases.

The main idea behind Lego Towers is to build a huge tower by adding levels to it. Each level has a certain function, e.g. Health Club or Apartments. Minifigures, that’s the Lego term for the little figures that you find in most Lego sets, play a huge role in the game.

You may assign jobs to the minifigures, unlock new characters, and customize them, and interact with other players. 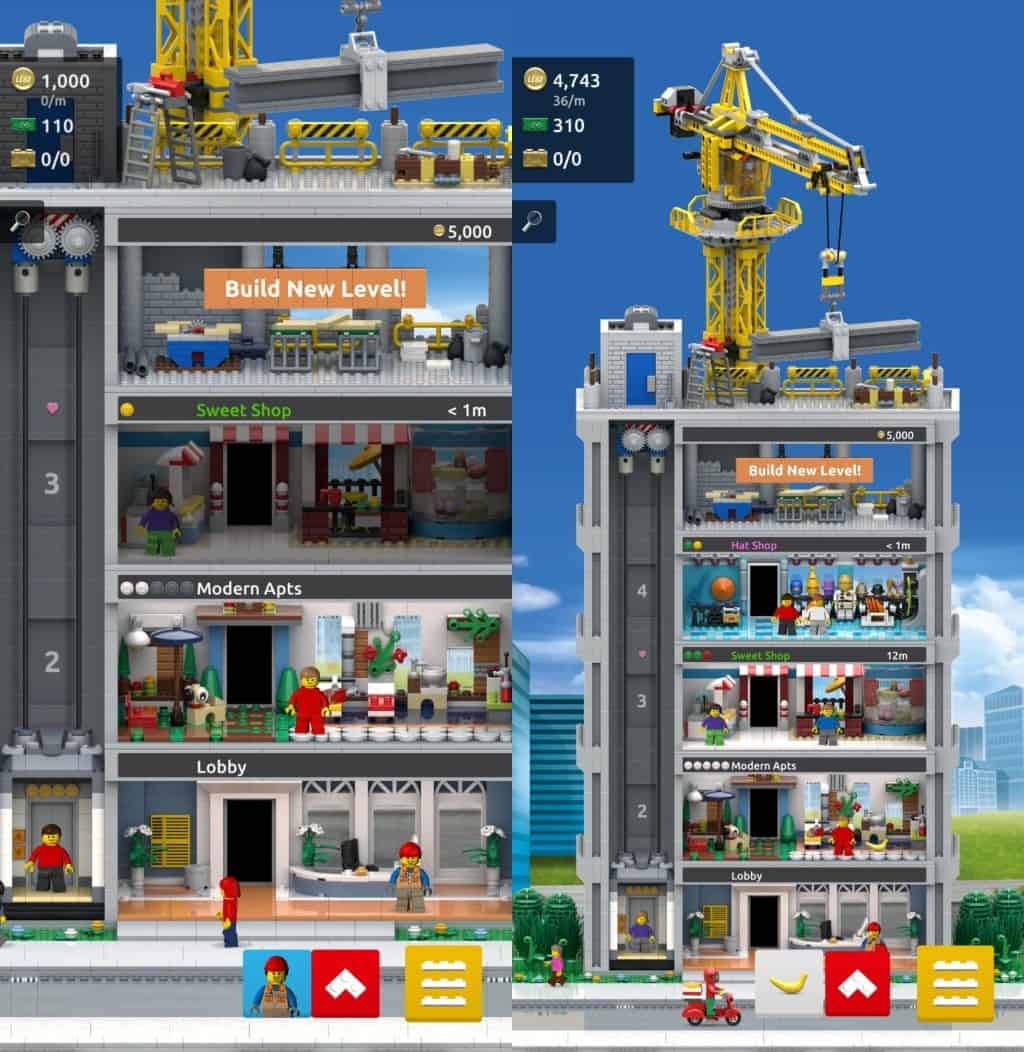 Here is how it all begins.

The game starts with a quick intro of key concepts and throws you in right away. There is no sign up or registration process to get started; great.

You start with a basic tower and a tutorial of some sorts that walks you through the first steps. Hire a new minifigure, construct a new tower level, and pick a room type.

New residents will move in and you need to move them to the right level. Once moved in, you may assign them jobs so that they start earning money. Money is key, as you need it to expand the tower and for other things.

Lego Tower displays notifications at the bottom of the screen when events happen, e.g. when a minifigure wants to be taken to a certain level in the tower.

The gameplay is not stressful at all and some may even find it relaxing. Yes, you have to make some decisions in the game but it comes down mostly to assigning the right jobs to minifigures and building new levels.

Tip: if you cannot find how to exit the game: tap on the lowest level and there on the exit game icon.

Graphics are well done; they really look like Lego.

Lego Towers is a user friendly addictive tower building game in the Lego universe. It is a must play for Lego fans and for anyone who likes the tower building genre. Generally speaking, children will like the game and adults who play games on their devices will likely too.

What I like in particular is that the game is not overly pushy when it comes to in-game purchases. Yes, you can speed things up significantly when you use in-game currency to do so but you are not blocked completely in the game if you don’t spend money on these purchases.

The game is not complicated at all and while I played only for a bit, it became a bit dull after a while. That does not mean that others can’t enjoy it for a prolonged period of time but if you are used to games that have more meat, then you may not be entertained for a whole long time playing Lego Towers.

Still, the game is well designed and Lego fans and children in general will probably like it more. The collecting aspect of the game, the finding of new Lego parts to customize minifigures and the customizing of the tower and player minifigure, play a role in this as well.

Now You: Do you play games on your mobile devices?

Ghacks needs you. You can find out how to support us here (https://www.ghacks.net/support/) or support the site directly by becoming a Patreon (https://www.patreon.com/ghacks)). Thank you for being a Ghacks reader. The post First look at Lego Tower game for Android appeared first on gHacks Technology News.