So-called lite apps are quite en vogue right now. Lite apps are designed for low-end mobile devices or regions with slow Internet speeds. The apps are streamlined, use less resources and work better on slower connections.

Spotify Lite is no exception. Spotify launched its lite application on Google Play the other day where it is available for users from select regions only.

Spotify claims that it is available in 36 markets across “Asia, Latin America, Middle East and Africa”. Supported countries include Brazil, Mexico, Argentina, Egypt, South Africa, the Philippines, Vietnam, and India. Canada, surprisingly, is also on the list.

Tip: Interested users can download the APK from a service such as APK Pure to install it on their devices. The actual application is not region-locked, only the download on Google Play is.

Desktop users who don’t want to install the bloated Spotify client may install Xpotify on Windows 10 or Nuclear instead. 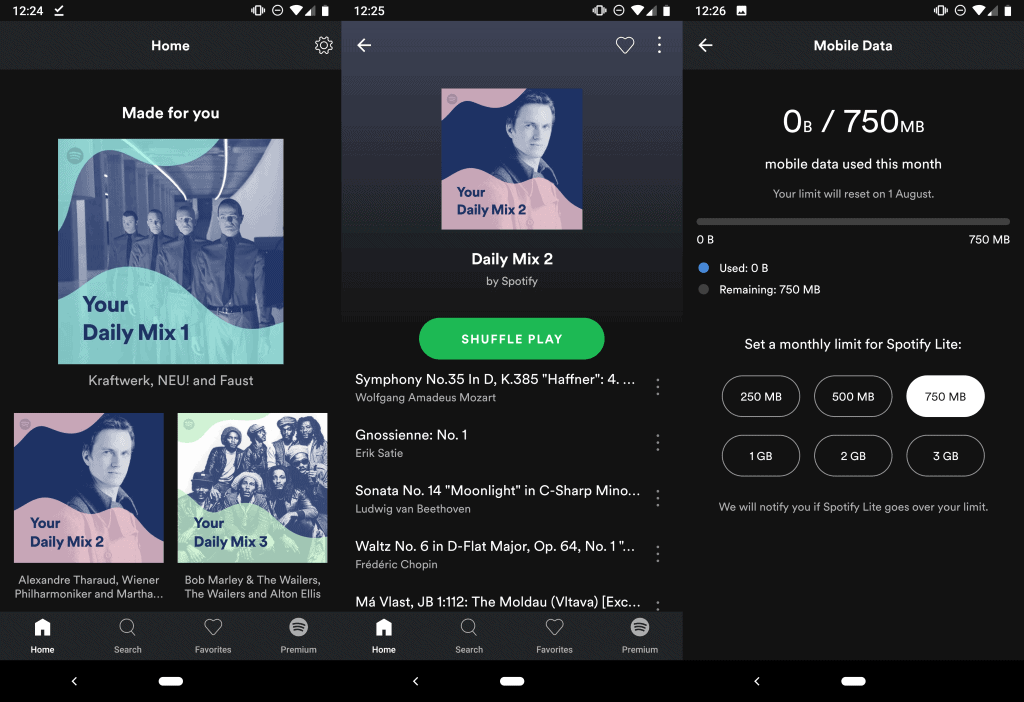 Spotify Lite offers some advantages but also some disadvantages compared to the main Spotify application. The application is considerably smaller than the full version which means that it downloads and installs faster than it.

The application should work just fine on the majority of Android phones and even under less than ideal network conditions.

Another feature that is new is the ability to set per-month bandwidth limits. The default is set to 700 MB per month but you may change the quota in the settings. Spotify Lite may display a notification when you are about to reach the bandwidth quota.

Note: I ran into troubles playing any songs using the Spotify Lite application initially. After some testing, and installation of the full Spotify application, I was able to fix the issue. The Lite application won’t inform you if you are over your “play in foreign country” quota for the app. The full Spotify app provided the info, and after changing the country to the current country in the settings, I was able to play music just fine using the Lite app.

Spotify Lite is available to free and premium users. Free users face the same limitations as in the full Spotify application.

Free users get a selection of playlists based on taste, and options to play other playlists provided by Spotify.

Spotify Lite works well and it is certainly not as resource hungry as the full Spotify application. While that is great for low to mid-end Android devices, the lack of download options makes it less usable for Spotify users in regions with slow or unreliable Internet connectivity. The latter may not be a problem for users who listen to music only when they are connected to wireless networks, but those who rely on Spotify for entertainment while on the go or in areas without wireless connectivity, may find it a deal breaker.

Now You: do you use Spotify? Did you give the lite version a try?

Ghacks needs you. You can find out how to support us here (https://www.ghacks.net/support/) or support the site directly by becoming a Patreon (https://www.patreon.com/ghacks)). Thank you for being a Ghacks reader. The post First Look at Spotify Lite a resource-friendly Spotify app appeared first on gHacks Technology News.