Windows 10 version 1903, the May 2019 Update, has not been released officially. The new feature update is available on MSDN, in the Release Preview ring, and also on various Internet sites unofficially.

Some Windows administrators who attempt to upgrade existing installations of Windows 10 to the new version receive “What needs your attention” error messages right now that indicate that PC hardware drivers or services are not (yet) ready for the upgrade.

The error message, unfortunately, does not reveal any information about the hardware. Microsoft plans to improve these error messages in Windows 10 version 1903, but administrators are left alone currently when it comes to troubleshooting and resolving the issue.

Microsoft was never really good at providing information. Back in 2017, users received another “what needs your attention” error. Back then, Windows stated that an app was not compatible with the new version of Windows 10 and that users should remove it. Windows 10 never revealed which app that was, however, so that administrators had to use trial and error to find the troublesome app. 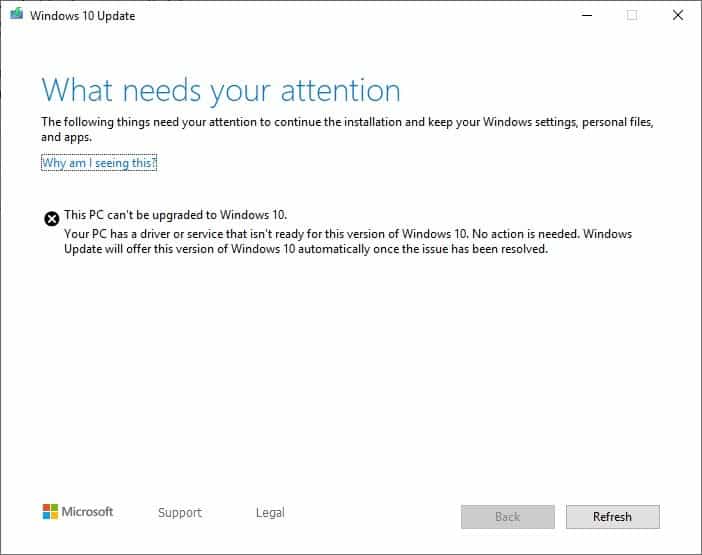 What needs your attention

The following things need your attention to continue the installation and keep your Windows settings, personal files, and apps.

This PC can’t be upgraded to Windows 10.

The new error message indicates that a hardware driver or service is the problem but fails to provide information. It is as if history repeats itself. Thankfully, suggestions on how to resolve the issue are already available.

Microsoft suggests to stay on the installed version of Windows and wait for Windows 10 to offer the new version via Windows Update. The company reveals that this will be the case when the issue is resolved.

Our colleagues over at Deskmodder offer the following suggestions:

There is no need to rush and install the new feature update right away or the minute it is released officially by Microsoft; while some user groups may want to install the update to test new features and changes, most may want to wait several months before installing the new upgrade.

Now You: Did you run into the error? What did you do to resolve it?

Ghacks needs you. You can find out how to support us here or support the site directly by becoming a Patreon. Thank you for being a Ghacks reader. The post Fix “What needs your attention” error when upgrading to Windows 10 May 2019 Update appeared first on gHacks Technology News.