If you own a Nintendo 3DS or 2DS console, you are probably aware of CFW. Custom firmware is very useful for a lot of reasons.

Installing a CFW can be a bit tricky. One obstacle which I personally encountered during a CFW install, was the infamous ARM 11 error.

I was curious to see what the newly released Luma3DS 10.0 CFW had to offer, and was trying to get the homebrew launcher running via the Rosalina menu.  Once I exited the Download Play app, and re-opened it to open the homebrew launcher, I got the screen that you see above. This step which is a usual part of the install, should have worked, but it didn’t.

This tutorial assumes that you are familiar with the popular and well-written guide on 3DS Hacks.

What didn’t work for me 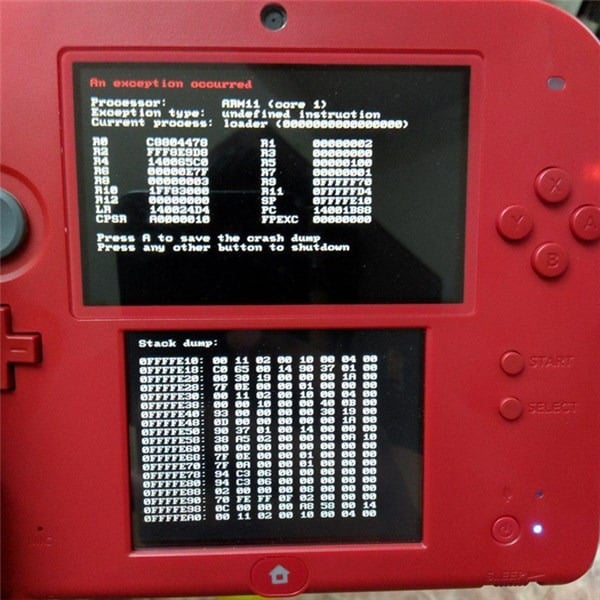 Let me save you some time and tell you what not to do. Naturally when I thought the app wasn’t working, and tried a different one. A commonly recommended fix, is to use the Health and Information app, which is pre-loaded on the Nintendo 3DS. But when I tried it, the console threw the same error.

I also tried the Luma configuration menu’s options, which includes the Game patching, and disable ARM 11 errors, to no avail.

How to fix an exception occurred error on Nintendo 3DS

In my case, I had to re-download the boot.3dsx file and put it in the root of the SD card. I also managed to confirm this was the fix, by deleting the boot.3dsx file and was able to produce the error screen successfully. The only other files involved during the process are the CTR and FBI. So, you may want to try replacing those too, in case the fix didn’t work for you.

Ghacks needs you. You can find out how to support us here (https://www.ghacks.net/support/) or support the site directly by becoming a Patreon (https://www.patreon.com/ghacks)). Thank you for being a Ghacks reader. The post How to fix an exception occurred error during CFW install on Nintendo 3DS  appeared first on gHacks Technology News.