Mozilla Firefox 57 will be released today; we have reviewed the new version of the web browser yesterday already. The new version comes with light and shadow; light, because it is faster and more responsive across the board, and shadow, because it dropped the old add-on system which Mozilla now calls legacy extensions.

All classic Firefox add-ons that are not WebExtensions at the time when you update to Firefox 57 are disabled automatically, and moved to the “new” legacy extensions section on about:addons.

While there is a chance that some may get updated to be compatible with Firefox’s new extensions system, some won’t.

That’s bad if you rely on these extensions, and don’t or can’t use the browser without them. We published a guide on running legacy extensions once Firefox 57 comes along already.

As far as support for legacy extensions is concerned, here is a short table that highlights the situation:

Your two main options are to install Firefox ESR and use it for the time being, or use a third-party Firefox compatible browser instead.

You can run Firefox and a browser mentioned as an option above side by side. While this may not be practicable in the long run, it may help out some users.

Start by downloading a copy of Firefox ESR from the official website. Note that you should not simply run the browser on your system as it picks up the default Firefox profile by default.

You don’t want Firefox ESR to use the same profile as other versions of Firefox. This means that you need to create a new profile for the browser and use it exclusively for it.

Tip: Check out our overview of Firefox command line parameters for additional information.

Here is how that is done:

Firefox will launch the profile manager. Select “create profile” there and follow the profile creation wizard. I suggest you pick a descriptive name, e.g. Firefox ESR, to distinguish it from other Firefox profiles. 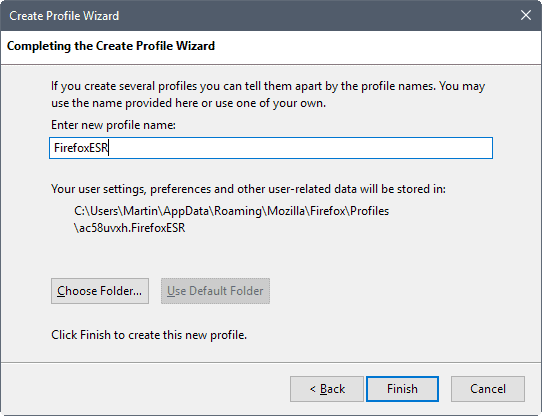 You have two options when it comes to installing legacy extensions in the new Firefox ESR installation. You can either do it manually, or use Firefox Sync for it.

If you don’t use Firefox Sync yet, it may be your best option. Since you can also sync preferences, bookmarks and passwords, it is ideal if you need to move these as well to the new installation.

The Firefox ESR version will receive any compatible browser extension afterwards. This includes legacy extensions. Note that it may not accept hybrid extensions such as NoScript.

You may need to install older versions of those extensions manually, as you cannot install these in Firefox ESR at the time.

You have two options here: install the extensions from the Firefox profile folder of the regular Firefox installation, or download and install them from Mozilla AMO instead.

Note: Both methods won’t install any customizations that you have made.

You can go to Mozilla AMO alternatively and download extensions from there.

You don’t need to create a separate profile for these, as they use their own profile folder.

There is no direct option however to import extensions to either browser. This leaves you with the manual options describes above.

The post How to move Firefox legacy extensions to another browser appeared first on gHacks Technology News.