One on the second Tuesday of the month and another later on that addresses issues mostly. The first update patches security issues and fixes bug, the second fixes bugs only.

The second cumulative update for the most recent version of Windows 10 gets delayed regularly. Microsoft published the updates for earlier versions of Windows 10 — Windows 10 version 1607 to 1803 — last week already.

While the company never mentioned why updates for the recent version gets delayed, it is likely that the bad release quality of Windows 10 version 1809 has something to do with it.

Last month’s patch for Windows 10 version 1809, KB4490481, arrived late as well. Note that I ran into a System Service Exception error last month when I tried to install the update on a PC. I did not have time to test this cumulative update yet. 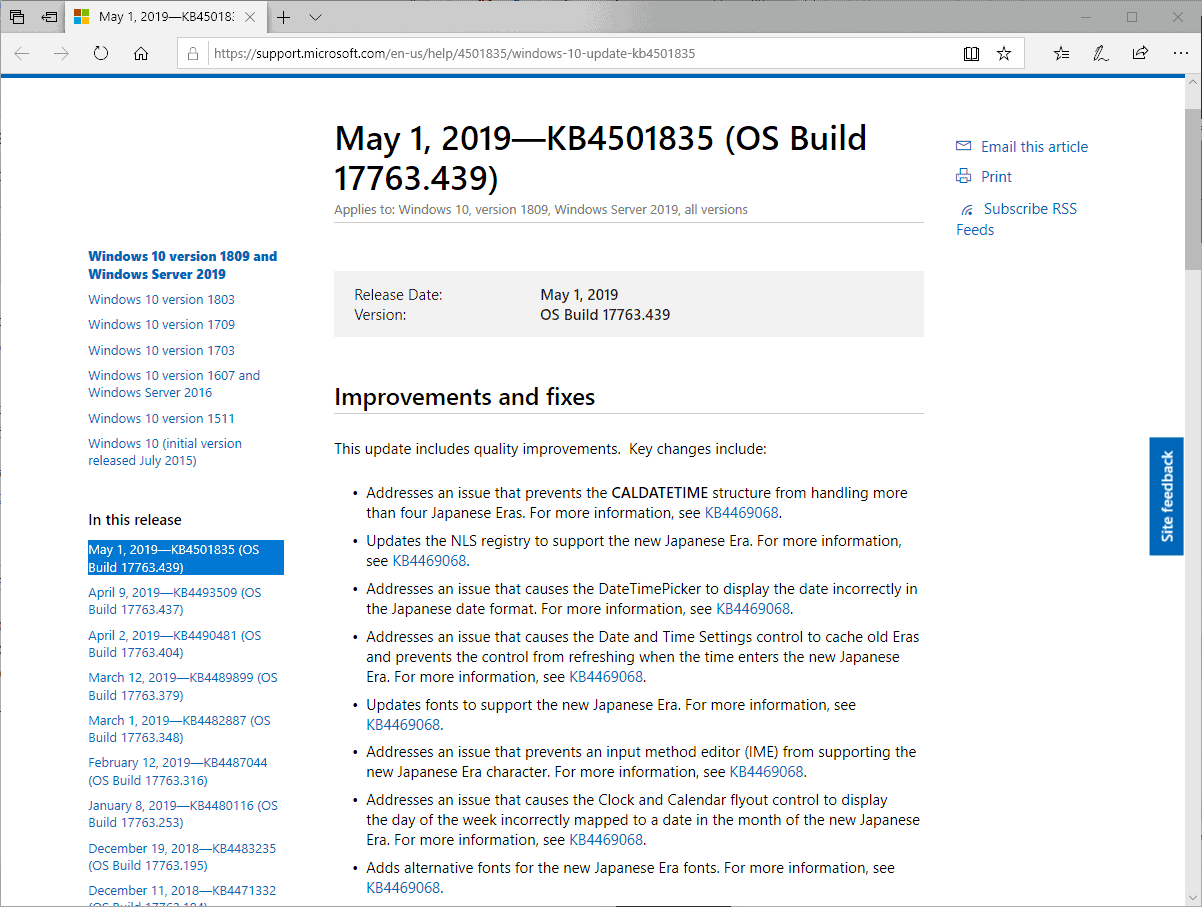 Admins who prefer manual installations can download the update from the Microsoft Update Catalog website as well. Note that you need to make sure that the latest Servicing Stack Update is installed on the device.

KB4501835 is a bug fix release that focuses mostly on another round of Japanese New Era fixes. The new era, Reiwa, began on May 1, 2019 after Emperor Akihito abdicated voluntarily. The name of the new emperor is Naruhito; he is the 126th emperor of Japan.

It is a bit surprising that KB4501835 includes just one fix that is not related to Japanese Era issues. Surprising, because the patches for Windows 10 version 1803 or 1709 include fixes for other issues as well.

Whether those were never an issue in 1809 or have yet to be addressed is unclear. The only other fix addresses an issue that prevents Hibernate Once / Resume Many from working correctly on UEFI systems.

I recommended that you wait with the installation of cumulative updates released after the security updates in any given month unless you are affected by any of the issues that they fix and don’t want to wait for the next Patch Tuesday update to deal with these issues.

Now You: How do you handle Windows Updates?

Ghacks needs you. You can find out how to support us here (https://www.ghacks.net/support/) or support the site directly by becoming a Patreon (https://www.patreon.com/ghacks)). Thank you for being a Ghacks reader. The post Microsoft releases KB4501835 for Windows 10 version 1809 appeared first on gHacks Technology News.