Mozilla launched Tracking Protection in Firefox Nightly (desktop and mobile) in late 2014, and enabled the feature for Firefox’s private browsing mode with the release of Firefox 39 in 2015.

Studies by Mozilla revealed that Tracking Protection decreased page load time by an average of 44% next to improving the privacy of users by blocking tracking cookies.

Mozilla relied on the Disconnect list and introduced an option to select different blocklists in late 2015. The organization launched a Tracking Protection Test Pilot experiment in 2016 to gather more data, and included full tracking protection functionality in Firefox 57 in 2017.

Tracking Protection got another boost in 2018 when Mozilla added mining and fingerprinting protection options to the feature. Mozilla made the decision then and there to push tracking protection in Firefox by improving its visibility.

June 4, 2019 marks the next step. Tracking Protection is enabled by default in all new Firefox installations so that third-party tracking cookies are blocked in all browsing windows ; a huge change to the previous default value that blocked trackers (and not cookies) only in private windows.

Mozilla plans to make the setting the default for existing Firefox installations in the coming months as well. 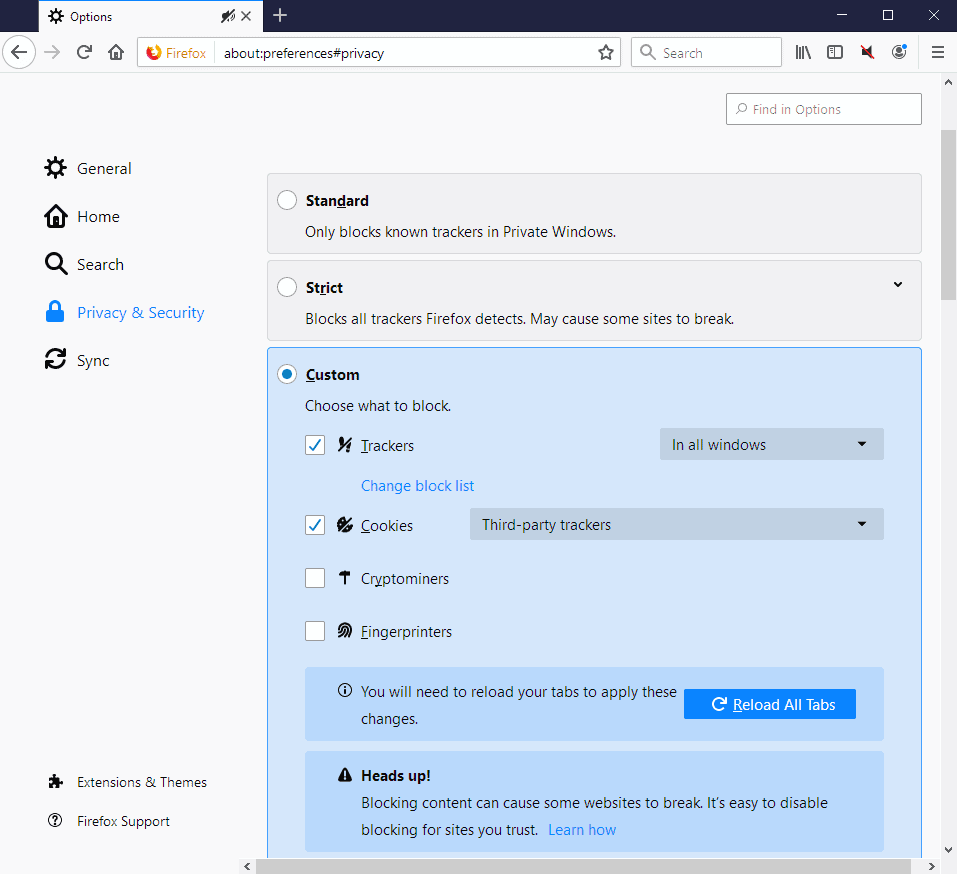 Firefox users who run the browser already may change the default setting to benefit from the new tracking right away. It is certainly also possible to disable the tracking altogether.

You can check out Mozilla’s content blocking support page for additional information on all options.

Mozilla indicates blocked content with a shield icon next to the web address in the browser’s main toolbar. A click on it displays what is blocked, an option to turn off blocking for that site, or to check what has been blocked by the browser’s protective features.

It took a long time to get where we are today. Mozilla enabling Tracking Protection for all its users is a welcome step as it improves privacy for all Firefox users. Some may say that limiting tracking is not going far enough, and there is certainly some justification to that as tracking is just one side of the coin that makes Internet users dislike ads.

Besides privacy, advertisement is disliked because it slows down the loading of sites, may be disruptive, and may be used in malware and scam campaigns.

Still, enabling tracking protection by default is a step in the right direction albeit one that Mozilla should have made years ago.

Now You: What is your take on Mozilla’s announcement?

Ghacks needs you. You can find out how to support us here (https://www.ghacks.net/support/) or support the site directly by becoming a Patreon (https://www.patreon.com/ghacks)). Thank you for being a Ghacks reader. The post Mozilla enables Tracking Protection by default in Firefox appeared first on gHacks Technology News.