Mozilla has put Firefox for Android into maintenance mode while it is working on something big for Android that it plans to release in 2019.

A message by Emily Kager on Twitter confirms that Mozilla’s development team for Firefox for Android is putting most development resources into something that Mozilla won’t reveal just yet fully.

The message on Twitter suggests that whatever is coming will be based on Android Components and that it will land in the next year.

Fennec will stay on Bugzilla but isn’t very actively being worked on right now, but Android Components will the basis of big things on Android in the next year! 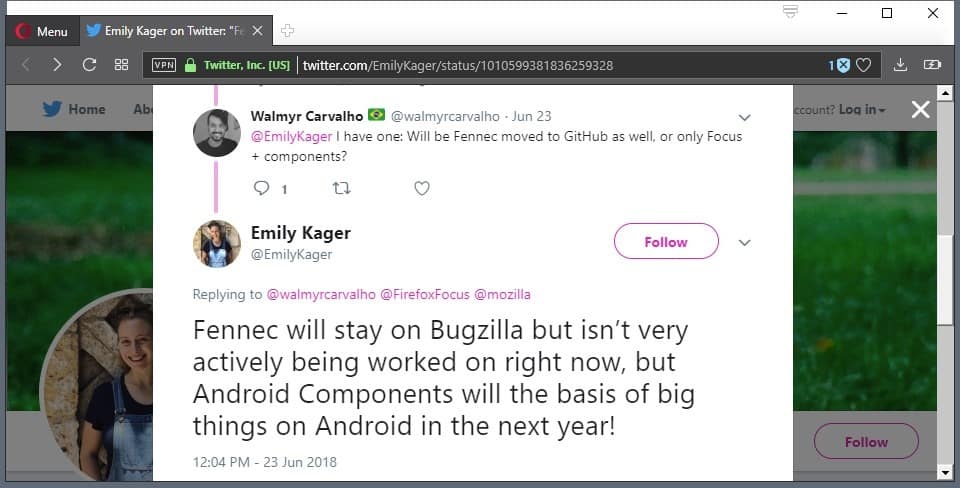 Firefox for Android received a number of important updates throughout 2018 so far. There was Quantum CSS in Firefox 60 which improved CSS rendering, support for HLS videos and progressive web apps, support for FLAC, permanent tracking protection, support for custom tabs, and a lot more.

Things calmed down with the release of Firefox 61 for Android which did not include a massive list of new features and the same will be true for Firefox 62 for Android and future versions that will be released in 2018.

While it is unclear what Mozilla has in store for Firefox on Android, it is clear that the organization bases it on Android Components.

Android Components is a collection of Android libraries to build browsers or browser-like applications. It is an open source project and it is quite possible that Mozilla is working on a new version of Firefox for Android based on Android Components.

One advantage of basing it on the collection of libraries is that Mozilla can use it for all of its browser projects for Android. The company has released and supports Firefox Focus / Firefox Klar, Firefox Rocket, and other Firefox-based apps such as Firefox for Firefox TV or Firefox Reality right now. The list of apps for Android is growing and unifying the backbone makes a lot of sense from a development point of view.

Sören Hentzschel speculates that the Android browser project Fenix could be the next version of Firefox for Android. He admits that there is no indication whether that is really the case, or if Fenix is  a demo or test project for Android components.

Android users who run Firefox right now can continue to do so as the browser will work just like before. Mozilla will patch bugs and security issues so that the mobile browser remains in a workable state.

It is unlikely on the other hand that the browser’s marketshare will rise significantly in 2018 considering that it is in maintenance mode. Whether the release of a big update or an entire new browser will shake things up on Android remains to be seen.

Now You: which browser do you use currently on your mobile devices?

Ghacks needs you. You can find out how to support us here or support the site directly by becoming a Patreon. Thank you for being a Ghacks reader. The post Mozilla has big plans for Firefox for Android appeared first on gHacks Technology News.