Firefox Hello, the messaging then screen sharing / video chat feature of Firefox will be removed from Firefox 49 if things go as planned.

Mozilla integrated Firefox Hello in version 34 of the browser. The organization did so natively back in 2014 which meant that Hello was part of the Firefox browser.

The main idea was to introduce an account-free option in the browser to communicate with others. Hello used WebRTC for that and was not restricted only to Firefox but compatible with any WebRTC compatible web browser.

Things changed significantly a year later when Mozilla announced that Hello would be turned into a different kind of service. 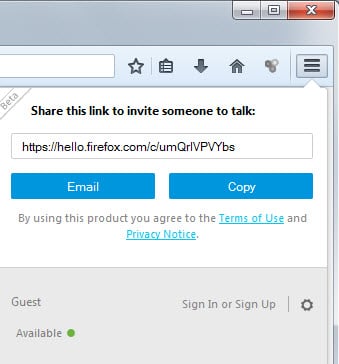 Mozilla removed contacts from the communication service and put the focus on tab-sharing instead. This made Firefox Hello more of a quick conversation type of service based on links that you needed to share with participants regularly.

The organization made the decision back then to turn Firefox Hello into a system add-on. So, instead of shipping the communication app with Firefox natively, it would now be provided as the browser’s first system add-on.

The main advantage of the separation of Hello from Firefox was that it allowed Mozilla to update Hello separately from the browser.

Now, eight months later, it seems as if the end has come for Firefox Hello. A recent Bugzilla bug listing on the Mozilla website suggests that Mozilla plans to remove Firefox Hello from Firefox 49.

Mozilla will remove Firefox Hello from Nightly 51 and Developer 50 first, and then from Firefox Beta 49. According to the post, this should not happen later than August 1.

The announcement comes as a surprise as Mozilla made no indication that Firefox Hello was up for evaluation or even removal.

The organization published a new update for Firefox Hello this month, and has been working on a bigger update codenamed Akita as well.

Mozilla gives no reason for the removal, at least not on Bugzilla. It seems likely that the organization will announce the removal of Firefox Hello before the release of Firefox 49. The version of the browser will be out on September 13, 2016 if the schedule holds.

One possible explanation for the removal is lack of use. Mozilla did not release information about the popularity — or lack thereof — of Firefox Hello. Another possibility could be that the company wants to focus resources on other features, like the recently announced FlyWeb integration. (via Sören)

Now You: What is your take on the Firefox Hello removal?