Mozilla maintains a list of recommended extensions for the Firefox web browser that it highlights on the official Mozilla AMO add-ons website and also in Firefox in various ways.

The system used to select these changed recently from featuring extensions on Mozilla AMO to a stricter system. The new system accepts extensions only if they meet requirements; some of these are self-explanatory, e.g. that extensions need to be safe, but some are not. 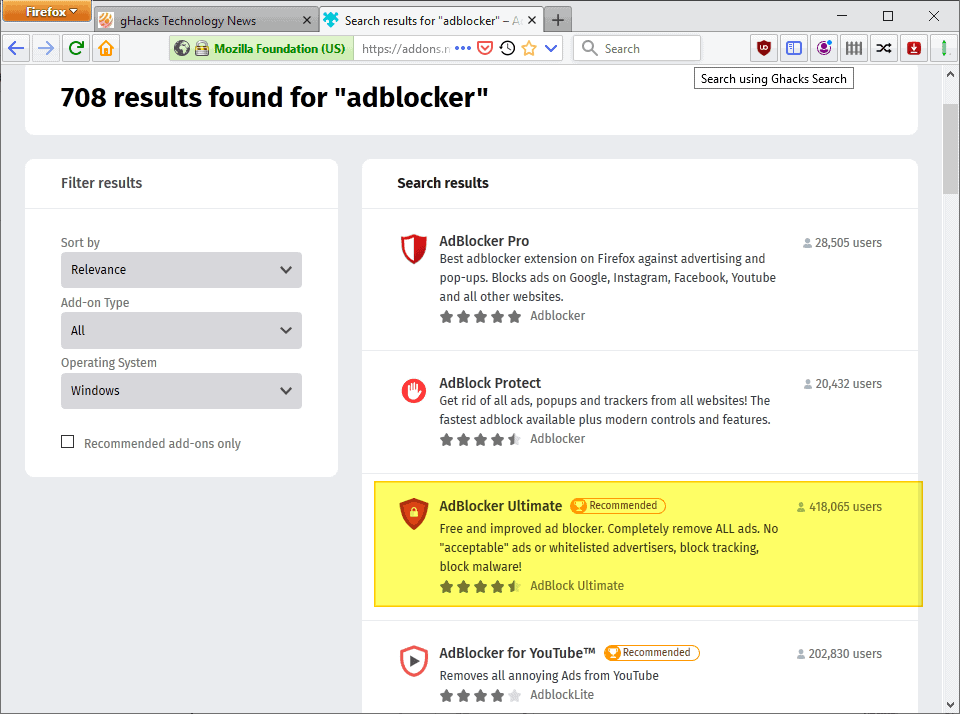 One of the recommended extensions, AdBlocker Ultimate, appears to be a copycat extension. Twitter user Rémi B. published the following message on Twitter today:

Why is @firefox recommending an extension which seems to be a copy-pasting from another extension and potentially in copyright infringement? @AdBlockUltimate claims to be open-source and GPLv3 so I installed and checked the sources using the debugger.

The code of the extension is very similar to AdGuard, a very popular content blocking solution. Rémi found mentions of AdGuard throughout the code of AdBlock Ultimate that suggest that code was copied from AdGuard. The AdBlock Ultimate extension has more users than Adguard currently; Adguard has about 322k users, AdBlocker Ultimate 418K.

Raymond Hill, creator of uBlock Origin and uMatrix, reported the AdBlock Ultimate extension in 2017 but nothing came out of it. In the report, he stated that the “extension is essentially a copy of Adguard extension for the core code, and essentially a copy of ABP for the user interface aspect”, and that he thought that Firefox users donating to extension developers would surely want to donate to the original developers.

One of the main objections is that the extension is recommended by Mozilla (AdGuard is not). It seems like a strange choice considering that the recommended extension appears to use AdGuard code.

Mozilla employee Gian-Carlo Pascutto responded to the thread stating that the organization is looking into it. The response time was very quick this time.  One possible outcome of the “looking into it” could be that Mozilla removes the recommendation.

The situation resembles another blunder by Mozilla that happened in 2018. The organization recommended a privacy extension back then in a blog post on the official Firefox blog that had a “phone-home” feature built-into the extension.

Now You: What is your take on all this?

Ghacks needs you. You can find out how to support us here (https://www.ghacks.net/support/) or support the site directly by becoming a Patreon (https://www.patreon.com/ghacks)). Thank you for being a Ghacks reader. The post Mozilla recommends a Firefox extensions that appears to be a copycat appeared first on gHacks Technology News.