The Firefox add-on NoScript was one of the best rated add-ons on Mozilla’s Firefox Add-ons website. It had a solid five out of five star rating by about 1600 different users, and more than 1.7 million active users in total.

If you check  the rating and users of the extension today, you will notice that its rating dropped to four out of five stars, and that the extension lost a good 100K users on top of that beginning at the time Mozilla released Firefox 57 Quantum.

To be precise, the rating dropped from a 4.7 to a 4.1 score in that time period. Still a solid rating, but mostly because of the excellent legacy add-on ratings NoScript got over the years.

Firefox 57 dropped Firefox’s legacy add-on system in favor of WebExtensions. A WebExtensions version of NoScript was in the works, but the release of that new version was delayed for a few days.

The reception was not the greatest, with reviews being evenly divided between users that heralded the new version and users who missed functionality that the old offered. 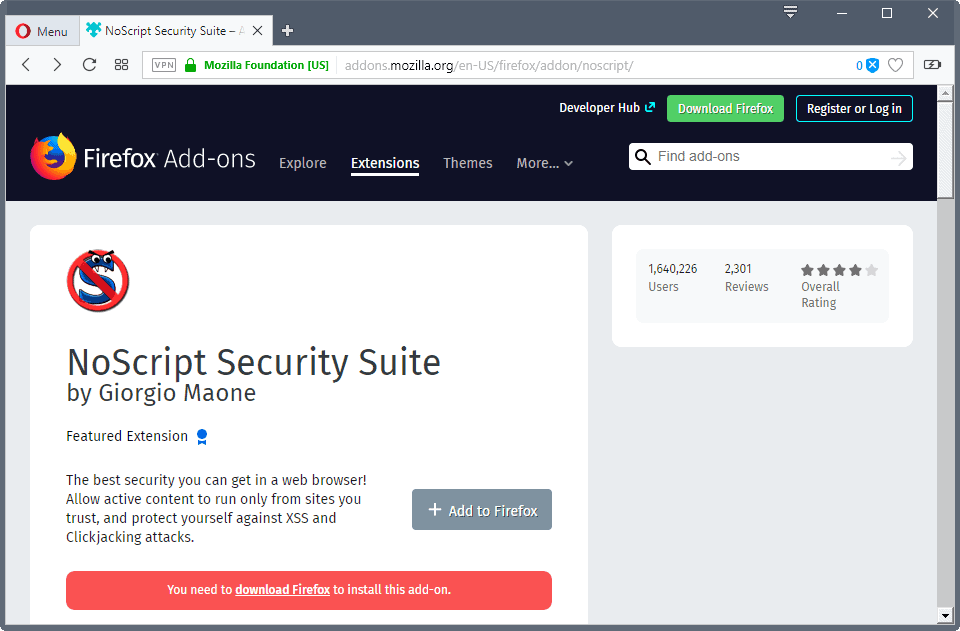 Giorgio Maone, the developer of NoScript released several updates since then that addresses some of the most pressing matters.

Not all reviews are negative, but most reviewers rate NoScript with one or two stars only. If you go through them, you will notice the following recurring arguments for giving the extension a low rating:

Some of the reviewers who gave NoScript a one star rating state explicitly that they “love” the add-on, and that it pains them to see that the add-on became unusable for them.

Here are a couple of quotes by NoScript users:

Honestly I loved this add on, until the firefox update and the new version of the add on. Now I can not get websites to work. I have to disable it to do even the most basic things. It keeps blocking sites even after I tell it to trust them. Horrible and Im very disappointed that I can no longer use it.

This used to be my go-to script blocker and it was fantastic. With the latest update though to make it work for the new Firefox, everything is upside down and it’s more or less unusable in its current state. The addon’s menu keeps bugging out and cant decide whether to be a dropdown like before or a standalone window. Furthermore I can no longer easily whitelist entire pages except for temporarily which is rather tedious for sites I visit alot. That it also refuses to save my settings for a specific site (where I have taken the time to click which parts of it I want to trust and which not) just makes the experience more frustrating.

The migration from Firefox’s classic add-on system to the WebExtensions system is certainly the root cause for the rating drop. One factor that certainly plays a role is that some APIs are not available yet in the stable version of the browser. Another was that changes had to be made to the interface of the extension due to the nature of WebExtensions.

It is clear that things will improve in the long run, but also that the WebExtensions version of NoScript will never be exactly like the legacy add-on version.

Now You: What’s your take on the situation?