Nvidia released a new GeForce Game Ready Driver on May 9, 2019. The new GeForce 430.64 driver fixes a performance issue in the previous driver version caused by the process nvdisplay.container.exe, and addresses security issues in driver components.

The new driver is already available on Nvidia’s official download site for all supported video cards and graphics adapters.

Note: it is recommended that you install only the driver components that you require, e.g. only the Nvidia video card driver. You may also want to make sure that Telemetry tracking is disabled on your system after driver installation. Programs like NVCleanstall or NVSlimmer may also be used to remove unwanted driver components. End 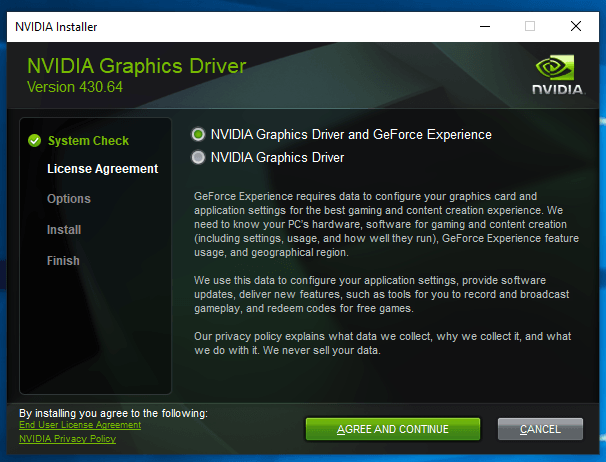 More importantly, it addresses the NVDisplay.Container.exe high CPU usage issue that was introduced in driver 430.39. Nvidia issued a hotfix release already but the GeForce Driver 430.64 is the first official driver release that patches the issue. Users affected by the issue may want to upgrade to the new driver version immediately to resolve the issue.

The remaining fixes in the release address several crashes and freezes: a crash in Hitman 2, a freeze in Shadow of the Tomb Raider when using SLI, and a crash when using BeamNG. The new release fixes the secondary monitor flickering issue and flickering when launching the 3DMark Time Spy benchmark.

The release has two unresolved issues on Windows 10. The first produces random crashes in the game Sniper Elite 4, the second affects the VSync setting.

The new driver version patches a security vulnerability that “may allow access to application data processed on the GPU through a side channel exposed by the GPU performance counters”.

Ghacks needs you. You can find out how to support us here (https://www.ghacks.net/support/) or support the site directly by becoming a Patreon (https://www.patreon.com/ghacks)). Thank you for being a Ghacks reader. The post Nvidia GeForce Driver 430.64 fixes high load issue and security issues appeared first on gHacks Technology News.