A new version of the Pale Moon web browser, Pale Moon 28.5.0, has been released on April 30, 2019. The new version is a major development and bugfix update according to the release notes.

Pale Moon supports automatic updates; just select Pale Moon > Help > About Pale Moon to run a check for updates. The updater will install the new version automatically on the system.

The development team changed the About page of the browser in the new version. The redesigned about page does not check for updates anymore; you find the option to do so under Pale Moon > Help > Check for Updates. 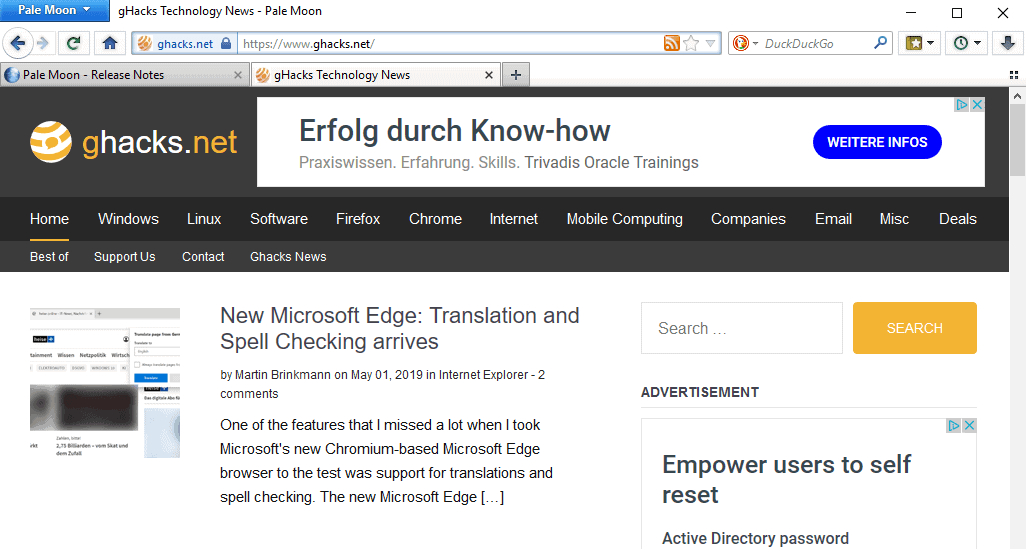 The new release, even though it is labeled as a major development update, is mostly a bugfix release. The developers addressed a crash issue with frames, another crash caused by improperly formatted SVG files, an issue with asynchronous or deferred scripts that prevented page loads from completing, and an issue that changed the custom New Tab Page URL occasionally.

The removal of unused or unneeded components continued in Pale Moon 28.5.0 as well. The team removed all Firefox Accounts code, the Windows Maintenance Service, e10 code from widgets, removed code and leftovers for certain unsupported operating systems such as OS/2 or SunOS, and removed crashreporter toolkit files and exception handler hooks.

As far as improvements go, there is a new Loop control for HTML5 video, improved DOS heuristics for basic HTTP auth, and improved handling of proxie and pseudo-VPN extension connections.

Updated site-specific user agent overrides for sites should improve compatibility with certain sites, and some libraries and files have been updated.

Pale Moon 28.5.0 is available for Windows (officially) and Linux (maintained by third-parties). A Mac version is on its way but not released yet. You can download the Windows version from the official website.

Now You: Have you tried Pale Moon recently?

Ghacks needs you. You can find out how to support us here or support the site directly by becoming a Patreon. Thank you for being a Ghacks reader. The post Pale Moon 28.5.0 is out appeared first on gHacks Technology News.