The Pale Moon development team released Pale Moon 28.6.0 to the public on July 2, 2019. The new version of the web browser is a major development update that focuses on “under-the-hood improvements and bugfixes, code cleanup, and performance” according to the release notes.

The new Pale Moon version is available via the browser’s integrated updating system already. Pale Moon users can run a manual check for updates with a click on Pale Moon > Help > Check for Updates. The browser should pick up the new version during the check so that it can be installed.

Pale Moon 28.6.0 is also available on the official project website. 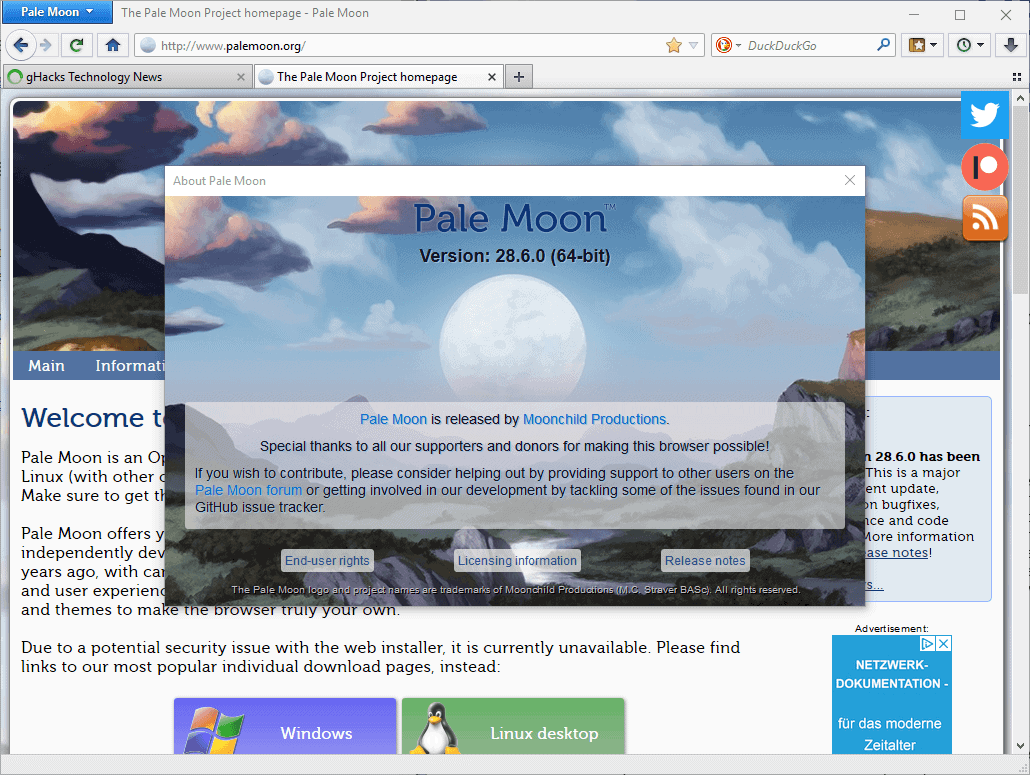 Most changes in Pale Moon 28.6.0 are under-the-hood changes; users should not expect a huge number of new features but the changes made in the release improve the experience in several ways.

Pale Moon 28.6.0 features support for new ECMAScript features that are part of ES2019, the next version of JavaScript and support for gzip compressed SVG in Opentype fonts.

The development team notes that the encryption may take some time to complete when set up depending on the number of stored passwords and the performance of the computer, and that it is not backwards compatible. In other words: the password store cannot be accessed anymore using older Pale Moon versions once the switch has been made.

Several components, some Telemetry related, were removed in the new Pale Moon version. The web browser includes several fixes for issues, e.g. an issue that prevented the printing of certain web pages or tab previews on the taskbar.

Pale Moon is a popular web browser, especially among former Firefox users who wanted to keep on using browser extensions that Firefox dropped support for when version 57 of the browser was released.

Ghacks needs you. You can find out how to support us here (https://www.ghacks.net/support/) or support the site directly by becoming a Patreon (https://www.patreon.com/ghacks)). Thank you for being a Ghacks reader. The post Pale Moon 28.6.0 major update released appeared first on gHacks Technology News.