A new version of the privacy and anonymity focused Linux distribution Tails has been released this week; Tails 4.0 is a major update of the Linux distribution that improves performance and usability, upgrades included components, and fixes security issues.

The new version is already available for download on the official Tails project website. The Tails 4.0 ISO image has a size of 1.1 Gigabytes. It can be burned to disc or put on a USB stick to boot into the environment. Note that existing distributions cannot be upgraded to Tails 4.0; a manual upgrade is necessary.

Tails was designed specifically to be run from USB or optical discs to run independently of operating systems installed on computer systems. It comes with Tor built-in and features several other tools and components to improve security and privacy.

Tip: check out Mike’s first look at Tails for a general overview of the Linux distribution. 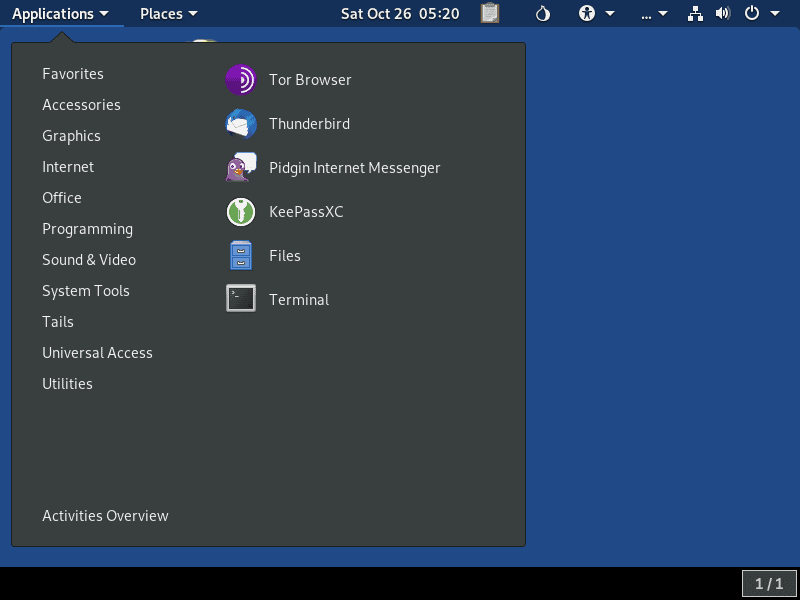 Tails 4.0 is based on Debian 10. The release features impressive performance and usability improvements. The startup time of the distribution should be 20% faster according to the developers. Additionally, Tails 4.0 uses about 250 less Megabytes of computer memory  and is 47 Megabytes smaller than previous versions.

The new version supports devices that use Thunderbolt and USB tethering from Apple’s iPhone is supported as well in the new version.

As far as software is concerned, the team replaced the password manager KeePassX with KeePassXC stating that the latter is more actively developed. Both are based on KeePass, a popular password manager for desktop systems.

The integrated Tor Browser was updated to version 9.0 which was released recently, and OnionShare, a file sharing software designed to share files over the Tor network, was updated to a new version as well.

The metadata scrubber MAT has no user interface anymore; its functionality was integrated in the right-click menu. Just right-click on a file and select the remove metadata option to scrub the information from the file.

Components such as Linux, Electrum, Enigmail, GIMP, LibreOffice, or Tor were updated as well in Tails 4.0.

Additional information about the new release is available on the official project website.

Tails 4.0 is a big update that improves RAM usage and startup performance significantly. Since it also includes security fixes, it is recommended to replace existing Tails distributions with the new version as soon as possible.

Now you: Have you tried Tails? What is your take on the distro?

Thank you for being a Ghacks reader. The post Privacy and anonymity focused Linux distro Tails 4.0 released appeared first on gHacks Technology News.