Vivaldi 2.6 is available already via the browser’s automatic update functionality. Just select Vivaldi Menu > Help > Check for Updates to run a check for updates. The browser should pick up the new version automatically and install it on the system.

The new Vivaldi release is available as a direct download on the official company website as well. You can check the installed version by selecting Vivaldi Menu > Help > About Vivaldi.

The big new feature in Vivaldi 2.6 is support for ad-blocking on abusive sites. The feature is enabled by default; it uses Google’s blocklist to determine whether to block advertisement on sites but hosts it on its own server for improved privacy as Vivaldi installations will retrieve the Vivaldi-hosted version when updates are available and not the version hosted by Google. Check out our initial coverage of abusive ad blocking in Vivaldi here. 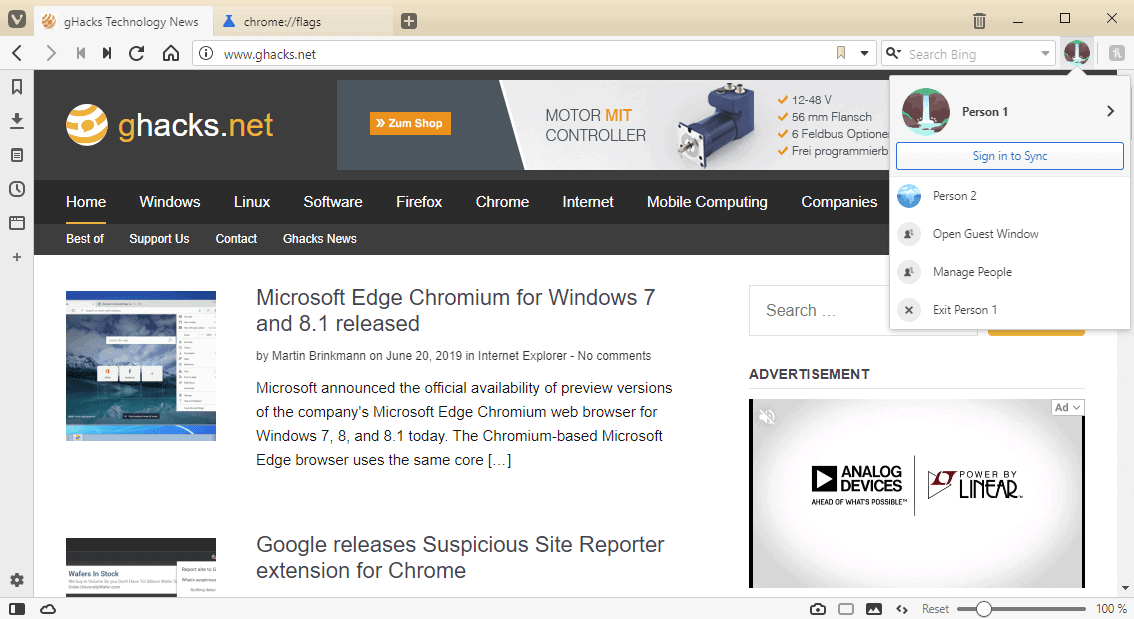 Vivaldi introduced support for user profiles in version 2.4 of the browser released in March 2019. Vivaldi 2.6 improves the feature in several ways. It is now possible to create multiple user profiles in a single Vivaldi installation directly.

Vivaldi users who don’t sign in to a Vivaldi account get options to update avatars, add and delete profiles in the popup, and to edit the avatar in the popup.

Other improvements in Vivaldi 2.6

Vivaldi 2.6 features other improvements that improve the browser in one way or another. Here is a short list of what is new:

Ghacks needs you. You can find out how to support us here (https://www.ghacks.net/support/) or support the site directly by becoming a Patreon (https://www.patreon.com/ghacks)). Thank you for being a Ghacks reader. The post Vivaldi 2.6 is out featuring abusive advertisement blocking appeared first on gHacks Technology News.