Xmarks, once a popular solution to sync bookmarks between different devices, is not working correctly anymore for many users of the service.

Xmarks (formerly known as Foxmarks) was released as a Firefox add-on back when Firefox did not support its own data synchronization service. It filled a gap at that time by allowing Firefox users to sync bookmarks between different devices.

The company was acquired by LastPass, makers of the popular password management service, in 2010. Development of Xmarks continued, and new versions were released regularly by the new owner of the service.

While LastPass has been busy porting the Firefox add-on of the password manager to the WebExtensions standard, Xmark development continued as well. The extension was released as a WebExtensions version in October 2017, and is compatible with Firefox 57 and newer because of that. 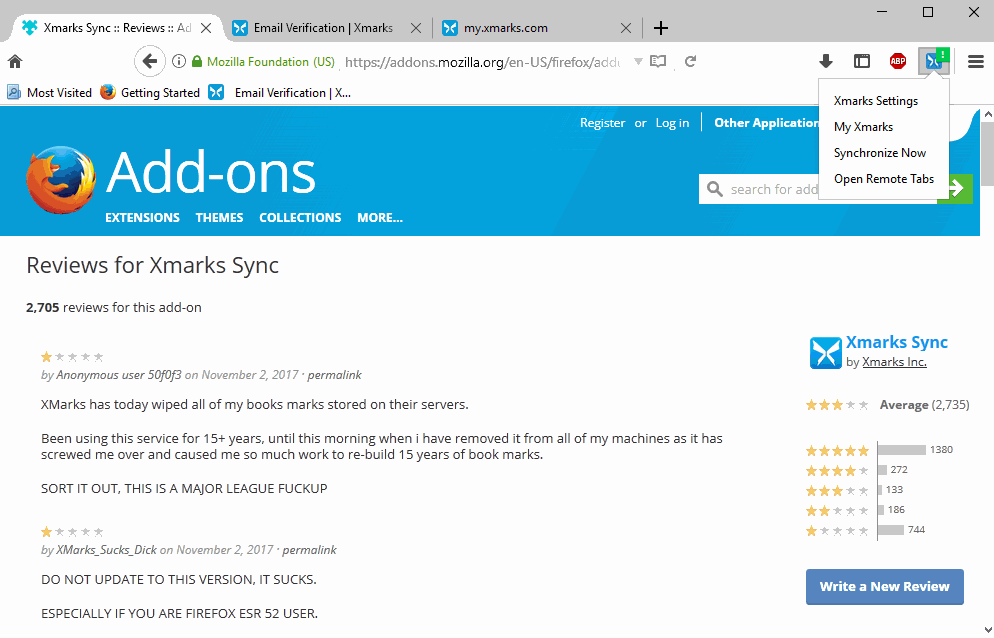 Ratings for the browser extension tanked significantly in the past couple of weeks though on AMO; the average rating is three out of five stars, and the first couple of pages of user reviews give the extension a one star rating (the lowest rating possible).

Coincidentally,  the Chrome extension received several one star ratings as well recently, but not nearly as much as the Firefox version received.

The developers have not responded to user inquiries, and the last blog post dates back to 2014. The WebExtensions version of Xmarks seems to be the root cause of the issues that users are reporting.

It is unclear if and when a new version will be released that will address these issues. Xmarks users should backup their bookmarks on the local system right now to avoid any bookmark syncing issues caused by the browser extension.

This stores a HTML file with all bookmarks on the local system. You can import the file at a later point in time in Firefox and many other browsers.

Firefox 56.x and Firefox ESR users should consider installing the previous version of Xmarks for the time being. Note that it won’t work anymore when Firefox 57 is released next week (will continue to work in Firefox ESR until next year).

Another option that Firefox uses have is to switch to Mozilla’s own syncing service. This works only if Firefox is used exclusively.

Now You: Do you sync bookmarks across devices?

The post What’s going on with Xmarks for Firefox? appeared first on gHacks Technology News.