If you have followed the development of the Windows 10 version 1809 and 1903, you know that both versions were plagued by lots of bugs. Microsoft had to pull version 1809 even shortly after release and spend six weeks fixing issues before it released an updated version again to the public.

With Windows 10 1903, it appears that every update that Microsoft releases adds to the growing list of known issues. We keep track of those issues here and Microsoft does the same on its Docs website; the latter is an improvement over previous releases as it is now easier to keep track of all the bugs.

Microsoft released the September 2019 security updates for all supported versions of Windows last week. The update for Windows 10 version 1903 fixed a high CPU usage issue caused by Search/Cortana that some users experienced on their devices. The fix resolved the issue but it did introduce a number of new issues at the same time. 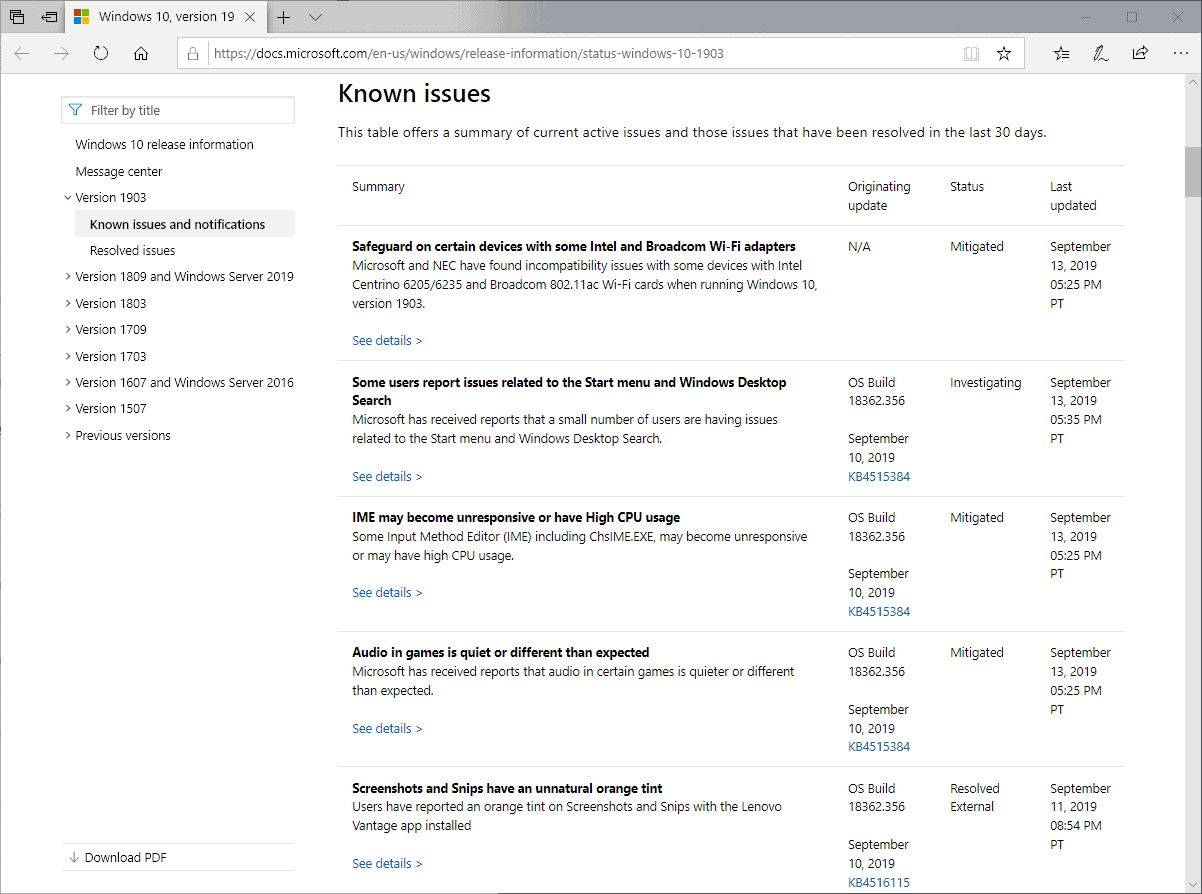 We talked about the Start Menu and Desktop Search issues that some users experienced after update installation; turns out, that is just one of the issues that the new update introduced.

Microsoft lists three additional issues that users may experience when they install the latest update for Windows 10 version 1903:

Issue 1: Audio volume may be quiet in games or different than expected

Microsoft notes that it has received reports from customers that audio is quieter than expected in certain computer games. The company implemented an audio related change in the new update for the operating system that “enabled certain games to query support and render multi-channel audio”.

Microsoft plans to revert the change because “some games and some devices are not rendering multi-channel audio as expected” which causes them to sound different and may have missing channels.

The issue affects NEC devices with Intel Centrino 6205/6235 and Broadcom 802.11ac Wi-Fi card hardware. Wi-Fi connectivity is unavailable when these devices are upgraded to Windows 10 version 1903.

Microsoft notes that the Wi-Fi driver may have a yellow exclamation point in the Device Manager (open using Windows-X menu), the network icon in the System Tray area may show the “No Internet” icon, and the Network & Internet settings may show no available WiFi networks.

Workaround: The following steps mitigate the issue according to Microsoft:

What is going on at Microsoft? The list of known issues increases and release quality seems to deteriorate with every update the company puts out.

Now You: What is your take on the whole situation?

Ghacks needs you. You can find out how to support us here (https://www.ghacks.net/support/) or support the site directly by becoming a Patreon (https://www.patreon.com/ghacks/). Thank you for being a Ghacks reader. The post Windows 10 version 1903: list of known issues growth, and growth, and growth appeared first on gHacks Technology News.